Last night, I had a dream about the rewards of writing, and when I woke I thought, I can blog about that. When I turned on my computer in the morning, I discovered this quotation in my Facebook timeline, which was a delightful synchronicity to start the day.

I slept and dreamt that life was joy. I awoke and saw that life was service. I acted and behold, service was joy ~ Rabindranath Tagore

Because this was my dream.

I am in a wild, upland place, being taken to see a wonderful plant. I’m given just the briefest glimpse of tall stems with early blooms of the most intense purple, and I realise it’s the colour that I’ve been brought to see. Usually, I am brought to see the indescribable aqua, but this time it’s this purple.

I’ve been writing something, and it’s a test – if I pass, I can come back and see this purple in all its intensity, in full flower. But this time, I have not passed and I will have to go back and start again, and try with another piece of writing.

This is the work, and I’m grateful for it. I don’t feel disheartened by failure, because the work itself is my reward.

It was always like this. I look back at all my writing, so many books I poured my heart and self into that never saw the light of day – real work, hard work – and I never achieved any kind of fame or recognition, but I don’t regret any of it.

Like the family years. I remember the sense of pride I took in the tasks of the household and childcare, which felt important, and a privilege, to be able to live in service to the work. I never felt bored or resentful, or that what I did was unimportant.

I had work, and I wanted to do it as well as I could. Not everybody is given that sense of purpose. I’ve glimpsed the colour, and one day I might see it in full flower, but the glimpse is the gift.

The first book I kindled, just to get a sense of what was involved, was my out-of-print parenting book, ‘When your Child is Bullied.’ I up-dated the text, gave it a new title and sent it to draft2digital, who formatted it and made it available on various platforms. I found a designer for the cover on the budget services site, fiverr, and it cost me literally a fiver.

But that was a book I wrote seventeen years ago, it had been published by three mainstream publishers and translated into half a dozen languages, so all I really wanted to do was make it still available for parents struggling to support a bullied child.

‘Writing in the House of Dreams’ is different. It’s never been published before, and because I only finished the writing last year, publishing feels like a continuation of the creative process, which is about honing and refining, nurturing and developing your unique idea.

So I’ve hired an editor to look at the text and a freelance designer to create a cover, because I want the book to be as good as I can possibly make it.

But never having worked with a designer before I had too little confidence in my own ideas, and too little clarity, to be able to give her much of a steer as to what kind of cover I wanted, and when her first sample arrived I was disappointed. I had wanted my cover to be colourful and creative, and beautiful too, but this cover was grey and kind of business-like.

While I was wondering whether to just accept the cover I didn’t like because I didn’t know exactly what else to suggest, I had a birthday, and one of my daughters bought me a beautiful ceramic piece by Hilke MacIntyre that I had admired in the Fowey River Gallery. There was an information sheet with it, and out of curiosity I went to Hilke’s website.

There I found a whole page of linocuts, one of which felt exactly right for my book. I sent the link to my designer and she was very keen on designing a new cover around it. Having seen the image, she had a much better idea of what kind of things I wanted my cover to say.

So I contacted Hilke and asked if I could use the image, and we agreed terms with no difficulty at all over a friendly email chat.

When you’re in a quandary and have no idea what to do, and then life places something right at your feet like a great big arrow saying ‘Go this way!’ I reckon you can move forward confidently, knowing you’re on the right track.

Has life ever answered your question when you’ve been wondering what to do?

I like to start every new year with a brand new piece of writing so every autumn I put together a short-list of ideas for my next book and then watch for synchronicities to help me decide which one to go with. This year, as usual, life has given me some prompts.

2013 got off to a cracking start for me when I tutored my first ever Arvon course on ‘Writing for Children.’ I had never previously taught children’s writing because it seemed to me that writing for children was pretty much the same as writing for adults – all the elements of fiction such as plot, settings and characters work in the same way, and whoever you’re writing for you have to target your particular reader.

But being asked to teach writing for children meant I had to really think about not only what is the same but also what is different, and teaching the course turned out to be pure pleasure. I enjoyed it so much that I wrote a new series of evening workshops on writing for children which I taught at the end of 2013.

At the first session, I dug out various books I thought people might like to read, including the very latest book on writing for children, by Linda Newbery and Yvonne Coppard.

Flicking through the back matter for more ideas, I discovered that Writing in the House of Dreams is included in the recommended writing blogs, the only one by an individual among half a dozen group blogs. That felt most affirming!

Then, at the last workshop session, one of the participants mentioned that she’d seen my children’s book, ‘How to be a Brilliant Writer’ in Maeve Binchy’s recommended reading list at the back of her book on writing. 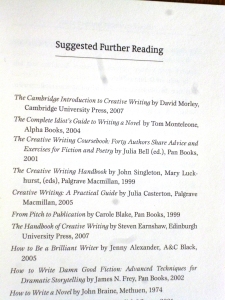 One of the ideas I’d been mulling over for my next project was a book for adults about writing – just writing, not in relation to dreams. But although I’d wanted to do that for ages, it didn’t seem sensible because there were already so many books out there by writers about writing .

I always follow life’s promptings, however, so with a gleeful click of the heels I’ll be up, up and away writing an adult book about writing to go with my children’s one in the New Year. The various other projects I’ve been mulling over will have to wait until their time is ripe.

What new projects are you looking forward to in 2014? Have you felt prompted by life?