One night in January I remembered, in my dreams, holding my mother’s hand as she lay dying, the feel of her papery skin, and the growing distance in her eyes. The sound of her breathing as she laboured up that long hill, and the hope in my heart that she would soon see my father, waiting to greet her, on this day that would have been their 68th wedding anniversary. 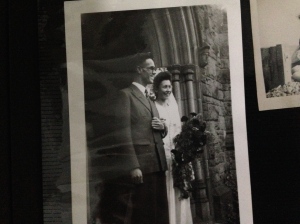 When I woke and wrote my dream down, I realised it was her birthday, the second one since she died. It hadn’t been in my waking thoughts, but my dream remembered, and this happens all the time. I dream about a person, and when I come to record it, I notice the date is some kind of anniversary.

It happens with death days too. In Writing in the House of Dreams I told the story of finding my sister Su’s poems and letters among the boxes in my shed after we sold the family home. They had been in the attic for years, and I’d forgotten I had them. I spent the whole day reading them, and then burnt them on a bonfire, thinking about Su. Wanting to make a note of a few things she had said to me before I forgot, I went to my journal, wrote down the date, and realised it was the anniversary of her death.

Even when we don’t consciously remember or mark an anniversary, it’s there in another level of consciousness. It may not emerge in a dream, but it may colour our mood, like an old stain; a drop of wine on a party tablecloth, a bruise on the heart. A friend once pointed out to me that every late September I seemed to have a dip – ‘Isn’t that the time your sister died?’ she said.

Family anniversaries are held in our own mind and they’re also held in the family’s collective consciousness, fixed points like pins holding down the billowing fabric of all the family’s stories.

Culturally, we create new ones, like World Book Day, Remembrance Sunday, the May Bank Holiday, and they become shared moments in the collective mind of all our various tribes – in these examples, book lovers, the UK and Commonwealth nations, workers and children.

The days that have meaning for us give resonance to the thin melody line of consciousness, because even if we forget what day it is, the dream remembers.

Have you ever dreamt or thought about a loved one and realised later that it’s some kind of anniversary?

2 thoughts on “The dream remembers”