The circle is an archetype for wholeness and integration, a universal pattern in nature and the human psyche which is also a template for the stories of life and fiction. You can use the  power of the circle archetype in writing, deliberately placing it in your mind by making mandalas.

The Power of the World always works in circles, and everything tries to be round. The sky is round, and I have heard that the earth is round like a ball, and so are all the stars. The wind, in its greatest power, whirls. Birds make their nests in circles, for theirs is the same religion as ours. Even the seasons form a great circle in their changing, and always come back again to where they were. The life of a man is a circle from childhood to childhood, and so it is in everything where power moves ~ Black Elk

Stories naturally make circles. The protagonist sets off, achieves or learns something in the course of the action, and returns changed. Often the work of redrafting is about refining the beginning and ending to tie everything into a satisfying whole. The crafting of a story is a process of perfecting the circle.

Dorothea Brande (‘Becoming a Writer’) says the unconscious is not only the source of our creativity, but also the home of form. This is why, when you have plot problems, new ways of fitting things together can naturally spring up in your mind as soon as you stop consciously trying to force them.

When I’m planning or redrafting a story I will often draw mandalas while I ponder.

‘Mandala’ comes from the Sanskrit word meaning ‘circle.’ It signifies a geometrical pattern based on a circle, and it’s used in every spiritual tradition as a focus for contemplation, meditation, protection, healing or prayer.

In its most basic form, the mandala is a simple circle, and if you’d like to try making some you can start by drawing circles. I recommend you do this free-hand, although your first attempts may look like lumpy lozenges. Keep working at it until you can do one that looks reasonably round. The process of this will anyway help attune your mind to the archetype.

Choose any geometrical shapes you like, but try to achieve balance, so that the sides and segments of the circle are the same. Drawing geometric shapes also settles your mind into the beautiful reality of numbers.

Treat the whole process like doodling, not trying to create art, but simply to play and allow your mind to idle. Keep building mandalas until you get one you really like.

Shading or colouring your mandala is a way of staying with the archetype for longer, and allowing it to work upon you. When you have finished, bring the energy of the circle with you into your writing. Bear it in mind as a template for your story, and see whether it gives you a greater sense of direction and clarity.

What creative activities do you use as part of your writing process?

A year ago I set up a facebook page for Writing in the House of Dreams, but then I didn’t do anything about it. I didn’t start posting updates, or drawing people’s attention to it, because I wasn’t sure what the value-added would be when I already had – and loved – this blog.

It’s gradually occurred to me, through following some excellent fb pages such as Dreamwork with Toko-pa, The spirit that moves me, Moon Woman Rising, Creativity matters, New heaven new earth and Action for happiness that a facebook page does certain things a blog can’t do.

A limitation with facebook pages is that ‘likers’ no longer see all the updates in their timeline unless the admin pays a fee, whereas every email follower of a blog will receive notification whenever a new post goes up.

So my conclusion is that neither is best – facebook pages and blogging can simply do different things. That’s the theory, and now I’m ready to try it out in practice, so I’ve added the link to my Writing in the House of Dreams facebook page to the widgets at the right hand side of this blog.

I do hope you’ll ‘like’ the new page and go on to become part of its active community. If you really do like it, please tell your friends!

One of the great things about teaching workshops is that you get to meet some very talented, interesting and likeable people. With the kind of workshops I do, such as ‘Writing the Tarot’ and ‘Writing in the House of Dreams’, most of the people who come also have a real sense of adventure.

Cue Paul Farrington, a keen traveller and talented young writer and photographer, who has done a number of courses with me now. At the last workshop before Christmas, Paul brought me a present, and here it is – a large print of a photo he took in America.

I’ve been contemplating this picture over the holidays – how we can see the outside in wonderful detail, but we can only imagine what lies inside that spacious interior. The dark windows reveal nothing; they only reflect back the world outside.

We are the House of Dreams – the outer life so clear and familiar, the inner world often caught only in glimpses, or sometimes completely ignored. Dream-recalling and creative work of every kind are keys to getting right inside, having a proper look around and making yourself at home.

That’s the great joy of writing for me. It enables you to inhabit more of your Self. Dreamworking does the same thing.

Thank-you for following, commenting, tweeting and sharing on facebook throughout 2012, and may your 2013 be rich with wonderful dreams and writing.

As I was writing the introduction to Katherine Roberts’ guest post last week, I suddenly remembered that a workshop exercise I did with the Scattered Authors Society on another occasion had in fact previously appeared in a book*

I called that workshop ‘Busting through blocks,’ and it explored a basic collage technique I use a lot in my own writing practice. You can use it to create characters, examine relationships between your characters, develop settings, find titles, spark stories… pretty much anything.

Whatever the issue is, hold it in the back of your mind as you flick through some magazines. Don’t think about which images, colours, patterns, words you need, or how they will relate to your project; just tear out the ones that draw you, and trust they will be the right ones, the ones you need.

This works through synchronicity, like tarot or other divinatory practices; the outer world reflects what is going on in your inner world.

Limit the time you spend on tearing out pictures to 10 minutes max, because you don’t want to overthink it. The whole process should feel instinctual.

Now get a pritt stick and a piece of plain paper or card. Again, follow your instincts and don’t overthink it, as you put your collage together. Take 10 minutes max for this stage, too.

Sometimes, your collage will give you the inspiration you’re looking for straight away, but there will always be more, so put it somewhere you will see it, on your study wall, for example. Look at it often. It will gradually reveal more of itself, and its relationship with your writing project.

What are your top block-busting tips?

Would you like to know where the dream house picture at the top of this blog came from? I’ll let Mooncakelizzie explain… Picturing the House of Dreams, by Mooncakelizzie I’ve been interested in creative writing for the past eleven years. Attending a multitude of classes and groups freed up a rabble of short stories and some novels, jointly written with someone who’s now a friend, met at one of Jen’s workshop series. These have not the rigidly defined tick-box ‘outcomes’ of formal courses, but are absolutely absorbing and simply fun to take part in. In particular, ‘Writing in the House of Dreams’ opened up a kind of secret garden I’d lived alongside almost unaware. There, for example, I could meet myself at younger ages, and also a hidden self who was growing, maybe pupating under a cabbage-leaf in a homely but boundless place. 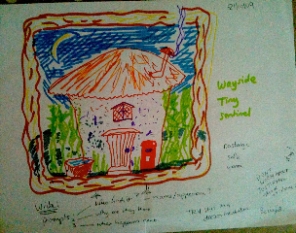 The first dream house drawing I made was during a workshop. We all told a dream, and then chose an image from one person’s dream to draw. We wrote three words to describe it. Then we asked three questions to spark a story – ‘Who finds it? Why are they there? What happens next?’ 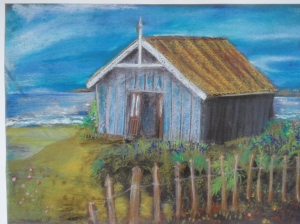 At home, I did more drawings. I began to put daydreams in, of living near the sea in a beautiful Oast conversion. A bit of Kentish beach; a view imagined from my little house. 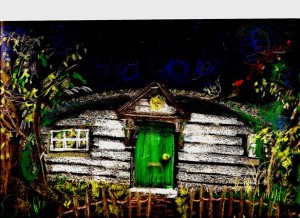 Then a night scene, an isolated hut on a wild headland with distant lights of other houses far away across the water. I don’t consciously know what’s inside.

Here, I can hold dreams, experiences, events and things I’ve picked up or eavesdropped on while careering openly in and out of that world behind the ‘hedge.’ 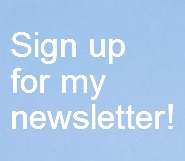