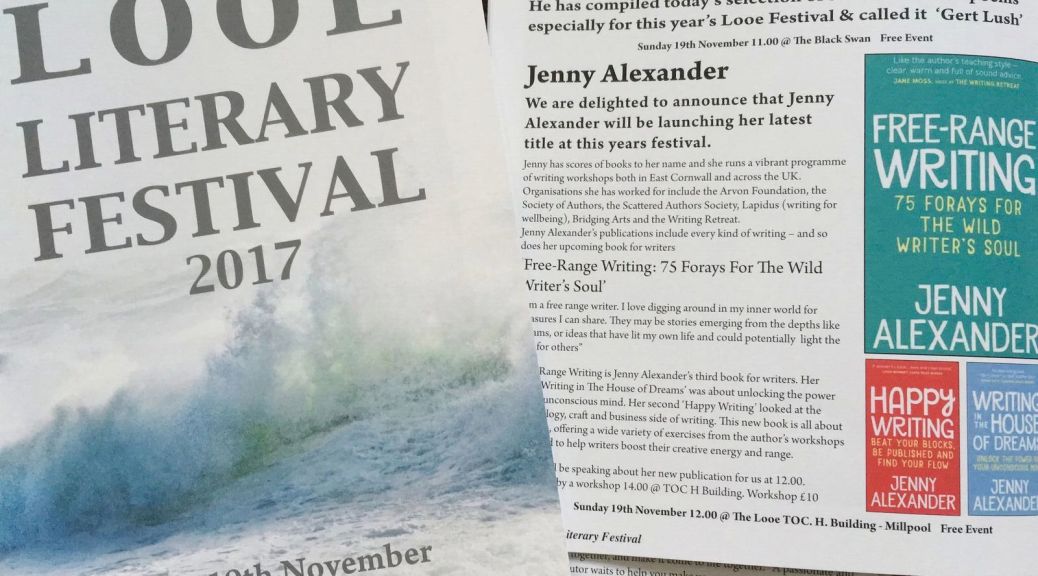 Today is the official publication day for my new book, Free-Range Writing: 75 Forays for the Wild Writer’s Soul, and I think I’ve found the perfect place to launch it.

All my previous book launches have been nibbles-and-bubbles parties, with a lot of mingling, a spot of reading and somebody lovely raising a toast.

I’ve held them in my garden, my local library, the back room of the village pub, an art gallery, the Sterts open air theatre… Every book is different, and so is every launch.

When I discovered that the Looe Literary Festival coincided with publication week I really wanted to launch my new book there. It’s a festival that truly celebrates local writing and grass-roots creativity as well as big name authors, and that’s very much the spirit of Free-Range Writing.

There are readings from the Looe Writing Group and the Liskeard Poets, whose book launch I attended recently, having been invited to select the poems for their anthology. Alongside talks by famous authors like Lord Owen, Adam Hart-Davis and Dr Susan Blackmore, there are lesser-known writers of fiction and non-fiction. There are panels and discussions on topics as various as fisheries policy and self-publishing. There’s plenty for children as well.

I’ve been in the green room at the Cheltenham litfest, mingling with TV stars who’ve written a book and hawk-eyed photographers trying to get photos of them, and felt curiously detached from the whole business. For me, writing is about all of us, ordinary people; we all have something interesting and beautiful to say.

Thinking only famous writing is good writing is a mistake, as anyone who has any experience of writing workshops will know. It’s also harmful because it can make us feel discouraged and reluctant to explore our own innate abilities. My new book is about freeing up your thinking, venturing into every area of your writer self and being surprised by what you find.

So this book is all about the writing, and I’ll be launching it in a different way, with a free-range writing talk at 12.00 on Sunday 19th November and then a workshop after lunch, at 2 o’clock.

I love doing these community workshops, partly because they’re a chance to work with writers of all ages. They’re not just for children, or for adults, or for families – they’re for everyone age 8+. We all have something interesting to say and we so rarely have the chance to write together. (Participants under 18 must be accompanied by an adult).

The Looe Literary Festival is a great event in a gorgeous location and it’s the perfect place to hear about Free-Range Writing, so please come along and help me celebrate if you can. I will hope to see you there!

I often think writing is a kind of coming out; we are always revealed in what we write, whether we are aware of it or not.

Simply setting pen to paper is a self-revealing act, which may make us aware of thoughts and feelings moving through us that we were not aware of before. Certain themes that recur time and again, certain characters and patterns of relationship.

Telling other people that you write is another stage in the coming out. I’ve had participants at workshops who have written whole novels and never told a soul, not even their nearest and dearest.

Sharing writing with friends or family pushes this coming out as a writer a little further, but reading to strangers in a workshop situation is another whole layer of boldness.

So how wonderful is it for me to hear from a workshop participant that she’s plucked up the courage to press send on a travel article, and again on a competition piece?

Her article, she tells me, has been accepted for a travel website with a membership of 40,000; her story will be published in an anthology of competition winners.

But as she says in her emails, it isn’t about payment or recognition – though that would be nice, of course. The real buzz is having had the courage to be heard.

I had a crisis point in my coming out as a writer. You can read about it here.

What about you? Have you come out as a writer? How hard was it for you?

I guess for a lot of writers, maybe the dream week would include standing up in front of a major festival crowd, receiving a huge royalty payment and being interviewed for a Sunday supplement.

But for a writer like me, who has experienced two of those and wouldn’t really want to again, the things that make a great week are comparatively humble. (I wouldn’t mind experiencing the massive royalty payment at some stage, of course – just to check whether I like it or not).

Here are five things that have happened in the last few days, and made my week:

It doesn’t come to much in terms of wealth and fame, but all those things add up to a pretty good week for a writer like me.

What would make a good week for a writer like you?

As the old year comes to a close, it’s time to take stock and think about what you’d like the new one to bring. Intention is a powerful magnetic force, and focusing on what you want greatly increases your chances of achieving it.

The sharper the focus, the better the chance; having a vague notion of something you might like to achieve is like throwing a dart in the general direction of the darts board and hoping it’ll hit the bullseye. It could happen, but it it’s not very likely.

Once you’ve set a goal, you need to think of practical steps you can take to work towards it. As you’re reading this blog, I guess you’re interested in dreams, so here are my suggestions for anyone who’d like to get more from their dream life in 2017.

You can read more about creative dreaming – that is to say, experiencing dreams rather than trying to interpret them psychologically – in Patricia Garfield’s classic book, Creative Dreaming, or in my own Writing in the House of Dreams.

I’ll also be running my Writing in the House of Dreams course in Cornwall later in the year, so sign up for my newsletter if you’d like a heads-up when I set the dates, or contact me, without obligation, to discuss a one-day or residential workshop for your writing group further afield.

That’s one of my New Year intentions in place – to include creative dreaming in my 2017 workshops programme – now time to ponder some more.

Do you set intentions at New Year? Could one of them be to get more from your dream life?

Just after I self-published Writing in the House of Dreams I blogged about my financial outlay in Self-publishing: What are the actual costs? Five months on, I thought you might like a progress report.

I initially registered the book in the amazon Select programme, which meant I couldn’t publish through any competing outlets for at least 90 days. The benefit of Select is that you can offer your book either free or on a sliding scale of reduced rates in a promotion which, while not making you any money, should make your book more visible and improve its amazon sales ranking.

I didn’t realise that you could only do one promotion in the 90 day period, and I don’t think the one I did really achieved anything for my book, so I wouldn’t personally enrol a book in the Select programme again.

As soon as the 90 day period was up, I took Writing in the House of Dreams out of the programme and made it available as an ebook via all the major online retailers, including Nook and apple, as well as amazon.

I’m thinking of publishing the paperback through Ingram Spark as well as Createspace (which is part of amazon), though I haven’t investigated whether amazon allow this (does anyone out there know?) I’m happy with the quality of the paperback, but apparently some bookshops are reluctant to sell books published by amazon. Happily, I have had orders from several independents as well as book wholesalers Bertram’s and Gardner’s.

Sales have been slow, and that hasn’t come as a surprise because the very reason the book didn’t secure a traditional deal was that publishers deemed writing about dreams as a creative resource rather than from the psychological angle ‘too niche to achieve bulk sales.’

But I’ve had some wonderful emails from readers and a big boost in demand for workshops, which my agent predicted would happen. The book includes lots of writing exercises I use in my general writing workshops, not just the ones which involve working with dreams.

I’ve also hand-sold a fair number of copies through events and workshops. All in all, I’ve recovered less than half my costs through book sales so far, but I’ve had enough extra workshop bookings on the back of it to make up the difference several times over, as well as an article on creative image-work for authors in the next edition of Mslexia.

This reflects the fiscal facts of being traditionally published, because very few authors indeed can make a living from royalties these days. Most have to supplement their income from books with some kind of day job, or spin-off work on the back of their books, such as teaching and speaking engagements.

I’m hoping sales will gradually build, through workshops and word of mouth, but I don’t want to annoy my twitter and facebook followers by over-promoting, so my strategy now is to bring out a second much more mainstream book on writing as soon as possible. If readers enjoy either one of these two books, maybe they might take a punt on the other.

This second book is called When a Writer Isn’t Writing: How to beat Your Blocks and Find Your Flow. I’m going straight to self-publishing with it because

Speaking of workshops, check out these pics from last week’s residential at The Writing Retreat in beautiful Lamorna, where I was invited to speak and teach a session on writing dialogue. Good times!